Have you ever purchased a glitter polish thinking it looked a little sheer... but that you might be able to get away with wearing three coats, only to discover that it's really sheer, as in six-coats-to-opacity-sheer and now you don't know what to do with it? I buy these sorts of polishes on purpose, and they're dead useful. I call them "sheer glitter toppers" and the following post will illustrate various ways in which you can use them. 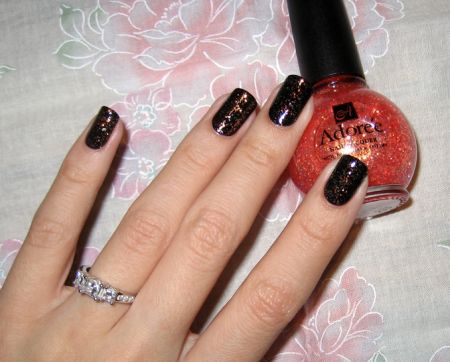 I've yet to find a sheer glitter topper that doesn't look awesome layered over black. Almost all sheer glitters with large pieces of glitter in them will change color in the light, but it's something that's usually not visible until layered over a dark creme. 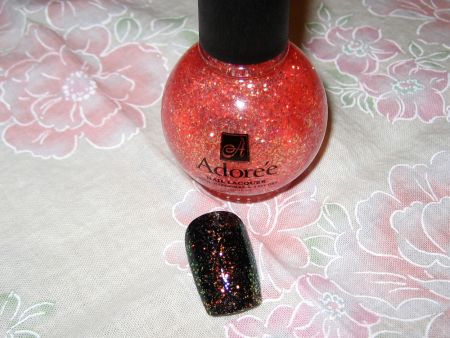 Pictured is one coat of black nail polish with one coat of Adorée's "Riding Hood" over. In the bottle, "Riding Hood" appears orange with golden glitter, but when applied over black it flashes orange to green which is really cool. You certainly aren't limited to black when applying toppers to get this effect, any dark creme will work. Last fall a lot of "nearly-blacks" were released, those sorts of colors will also work well to bring out the color-changing qualities in most sheer glitter toppers. 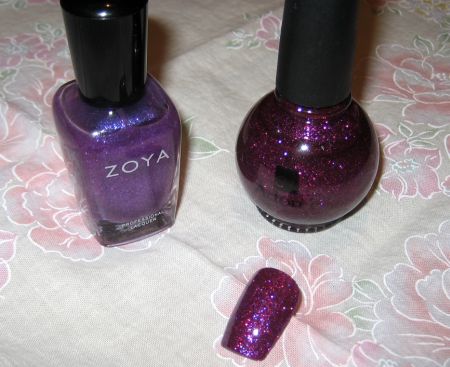 In addition to layering sheer glitter toppers over black or nearly-black cremes, you can layer them over other glitter polishes in order to create new combination glitters. By that I mean, the final result will show the two different glitter colors mixed and it will appear as if your polish was initially made up of more than one glitter color. (Doesn't it look like these two bottles had a little swatch baby?) If you get bored of the glitters you have, this is a simple and interesting way to make a "new" polish. Pictured above is two coats of Adorée's "Wild Inkberry" with one coat of Zoya's "Vegas Freeze" on top. Likewise, if you have a colored creme that you wish was a glitter, a sheer glitter topper will add shimmer to your polish without changing the creme color itself. Your base color will shine through while your sheer glitter topper adds a bit of interest.

Finally, my favorite way to wear sheer glitter toppers are as French manicure polishes. While a traditional nude-tinted French manicure polish always looks nice, using a sheer glitter topper instead can turn a plain French manicure into something more interesting and fun, especially if you replace your white tips with a bright creme. Pictured above is two coats of OPI's "I'm Indi-a Mood for Love" as tips with one coat of Adorée's "Ice Mist" over. Whether you layer them over black, use them to transform other polishes into a new glitter variant or use them as French manicure polishes, sheer glitter toppers are extremely useful polishes to have in your collection. For all Adoree glitter collection visit  EsthersNC.com, your online source for DIY home manicure & pedicure supplies and nail-related information. Featuring Non Toxic, Safer Nail Polish, Nail Art and Nail Treatment, FREE from Formaldehyde, Toluene & DBP.  Design and tutorial are provided by Asami from Nails by Asami blog.